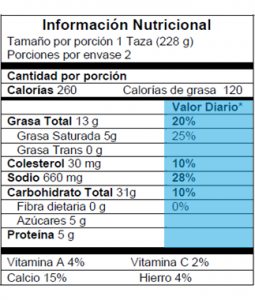 What each person needs to eat in a day varies according to gender, age, weight and amount of exercise, among other factors. Nonetheless, the daily value on food packages is calculated on a 2000 calorie diet which is considered a population average.

The percentage of daily value can help you identify in an easy and fast manner if the food contains high or low amounts of any of the nutrients. Bear in mind the following:

In the above label, the product should be avoided as it contains 20% of the daily intake of total fat, 25% of saturated fat and 28% of sodium.